The choice of whether or not to have a baby and when to have one is becoming more and more difficult these days.

Some couples may worry that having children will affect the beautiful world of two people, a lot more worst.

Some couples may be at the cold end of their marriage, wondering if having children will improve their relationship.

So having children can make a relationship worse or better?

Marriage after baby 1. The study says that when you have children, your relationship deteriorates dramatically.

Psychologist Professor Brian Doss et al. (2009) recruited 218 heterosexual couples to document life and emotional changes in their first eight years of marriage. The subjects went to the lab several times in eight years. During each data collection process, the couple fills out questionnaires and spends 10-15 minutes together discussing how to solve the problem. The discussion will be recorded throughout.

By analyzing questionnaires and videos, the team focused on six changes in the relationship:

(2) how much negative performance can be observed when the two sides communicate (e.g. denial, avoidance by one party, etc.);

(3) how much confidence there is in the relationship;

(4) the level of investment in the relationship;

(5) How bad the management of the conflict is (e.g., is it that a little spat turns into a fight);

(6) How serious the problems encountered in all aspects of marriage (e.g. money problems, sexual problems, etc.).

The study found that when couples have their first child, their relationship deteriorates suddenly and dramatically. In this regard, the couple’s feelings are not the same. Wives are particularly hard hit when they have children than husbands.

The husband experienced sudden negative changes in these three areas: a sharp decline in marital satisfaction, a sudden decrease in willingness to invest in the relationship, and a feeling of more negative behaviour in communication.

Taken together, on average, the relationship deteriorated dramatically after the birth of the child, rather than improving.

Marriage after baby 2. The relationship suddenly deteriorated, is it really just because you had a baby?

After obtaining the preliminary results, the researchers asked, “Is this sudden deterioration caused by other factors?” To do this, the researchers also recruited couples without children and also tracked their emotional changes (Doss et al., 2019).

It was found that while childless couples also showed signs of deteriorating relationships over time, the negative changes occurred gradually, while for couples with children, the relationship deteriorated violently and rapidly at the time of the child’s birth.

As a result, the researchers concluded that the sudden deterioration of the relationship was indeed due to the birth of the child. 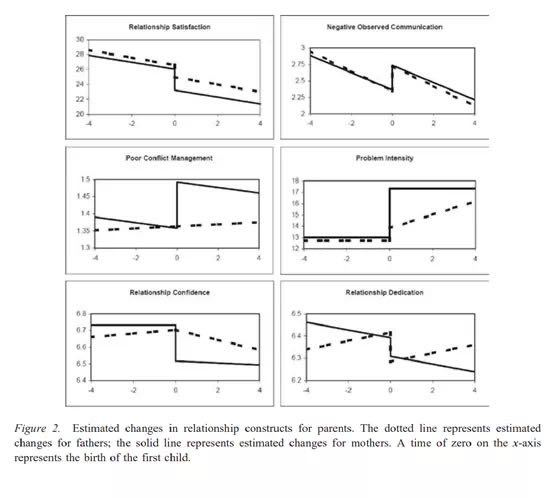 Over time, couples with children have changed in six ways. The solid line is female and the dotted line is male. The “0” of the x-axis is the point in time when the first child is born. It can be seen that the birth of a child brings sudden and strong negative effects on the couple (especially the wife). Screenshot from Doss, B. D., Rhoades, G. K., Stanley, S. M., &amp; Markman, H. J. (2009). 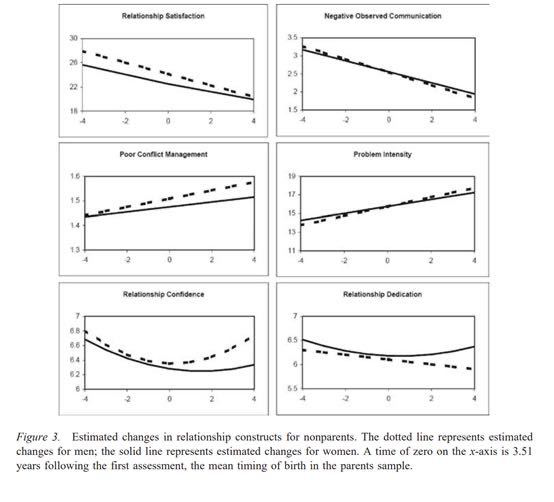 Over time, childless couples have changed in six ways. The implementation is female and the dotted line is male. The “0” of the x-axis is the time point of the couples with children at the birth of their children. It can be seen that changes are gradually taking place over time, and there is no sudden turning point. Screenshot from Doss, B. D., Rhoades, G. K., Stanley, S. M., &amp; Markman, H. J. (2009)…

Marriage after baby 3. However, having children also has a positive effect on the relationship between husband and wife

While the findings may sound depressing, a closer look at the results suggests that the birth of a child may also increase people’s commitment to relationships. However, this population effect only occurs in the husband.

“As can be seen from the chart above, although the willingness of husbands in the child group to invest in the relationship will plummet at the beginning of the child’s life, the level of commitment will gradually pick up over time;

Another bad news is that couples become less willing to divorce or separate permanently (White and Booth, 1985), even though having children can make the quality of their marriage worse. This may be good news for those who want to make their relationship stronger by having children, but it can mean prolonged suffering for couples who want to leave their marriage and for children who have seen their parents fall out.

In short, children are not a panacea for marriage, nor is it poison for couples. If you want to solve problems that already exist in your marriage, it’s better to address them more specifically than by having children. On the other hand, the birth of a child also means that the relationship will encounter more stressful events, will suddenly face the pressure of child care, financial pressure, changes in the pace of life, and so on. Couples can face the changes and challenges of life together after having children, and their relationship can take it to the next level and embrace your common home together.